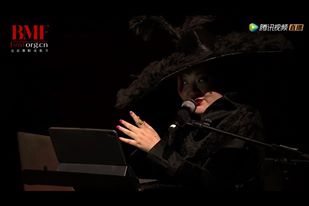 for String Quartet and a Narrator
Duration: 19 mins

In 2004, I wrote my first chamber opera, Zolle, which was a story on theafterlife. As I was finishing Zolle, I fabricated another piece that would serve as a life-beforefable. At this time, I was living in a government subsidized student apartment. When I would take breaks from my work, particularly in the early hours, I would talk to the many cockroaches that shared my residence.

A Cockroach’s Tarantella was meant to score for a string quartet and a narrator as a stand alone piece at a later timeas well as a prelude to Zolle. Both stories are steeped in humankind’s ubiquitous fascination with regression, the conflict of belonging and alienation, and the resurrection archetype.

The female cockroach species mate once in their lives, and then continue to produce ootheca, or egg cases, of thirty to forty eggs at two to three day intervals under temperature of 20 degrees Centigrade. The average cockroach lifespan is 6 months to a year.

Female cockroaches can reproduce for years without needing a mate, producing dozens of generations of all-female descendants, a team of scientists has found. Parthenogenesis is a form of asexual reproduction, allowing young insects to spawn from unfertilized eggs.

Story and text by Du Yun

Maestro Yu Long, founder of the Beijing Music Festival, is on a mission to showcase the talents of the next generation of Chinese composers.

Over the past two decades, the annual Beijing Music Festival has served as an arts feast for audiences in the capital, but also been at the forefront of promoting Chinese composers.

However, for maestro Yu Long, the founder of the festival, he still feels compelled to introduce more emerging talent to classical music lovers.

“When we talk about Chinese composers, it seems that names like Chen Qigang, Ye Xiaogang and Tan Dun, share something in common. They started their careers in the 1980s and become internationally renowned during the 1990s. Their musical works are still being performed worldwide, and are often described as ‘voices from China’,” says Yu, chairman of the artistic committee of the music festival launched in 1998, where he served as its artistic director until 2018. “We have performed their works many times and I couldn’t help wondering ‘What about the younger generation of Chinese composers?'”

During the 22nd Beijing Music Festival, which ran from Oct 4 to 28 and featured 22 performances, audiences were introduced to two younger Chinese composers debuting their work in the capital.

One of them was Shanghai-born, New York-based composer Du Yun, whose opera Angel’s Bone was staged on Oct. 18 and 19 at the Poly Theater.

The opera, which premiered in January 2016 in New York, tells the story of two angels who land on Earth. After being discovered by a financially-troubled couple, the angels are forced into slavery to make money for them.

Combining vocal and instrumental elements with a wide range of musical styles, the opera took the composer seven years to finish. In 2017, Du won the Pulitzer Prize for Music for Angel’s Bone, making her only the second Chinese composer to win the prestigious prize after Zhou Long in 2011 for his Beijing Music Festival-commissioned opera, Madame White Snake.

The second composer making their debut at the Beijing festival was Zhou Tian, who was nominated for his work Concerto for Orchestra in the best classical contemporary composition category at the 60th Grammy Awards, the first Chinese composer to do so in that category.

On Oct 25, Zhou Tian’s musical pieces, Rhyme for Cello Solo, and Reading an Anthology of Chinese Poems, for narrator, flute, viola and harp, were performed by the Mahler Chamber Orchestra under the baton of conductor Vicente Alberola. Du’s work, A Cockroach’s Tarantella, was also staged during the concert.

Titled Thriving Artistry of Contemporary Music, A Celebration of Chinese & Western New Compositions, the concert was a celebration of modern music showcasing the work of the next generation of domestic and overseas composers.

“We want to introduce the outstanding achievements of the new generation of Chinese musicians to domestic audiences. That’s why we have Du Yun and Zhou Tian this year,” Yu says. “They are bold, open and deeply grounded in the entire spectrum of Chinese heritage, such as folk music and philosophical and spiritual ideals.”

“The audience in the world of the arts is ready, and as a composer, what I need to do is write music,” says Du, 40, who began studying piano from the age of 4 and graduated from Shanghai Conservatory of Music with a major in composition before moving to the United States. She graduated from the Oberlin Conservatory of Music with a Bachelor’s of Music degree in composition and received her PhD in music composition from Harvard University. “I have been writing music since I was 11 years old and have never stopped. It’s important to me to engage people in a dialogue with music. Even if I won a Pulitzer Prize, it wouldn’t change me.”

For Zhou, Concerto for Orchestra, his 35-minute piece commissioned by the Cincinnati Symphony in 2016 developed from a 15-minute piece he wrote in 2013. But before he was offered the opportunity, Zhou, like Du, kept on composing.

“As a composer, I spend a lot of time alone and try to write one piece, which usually takes months to finish. I imagine the whole orchestra in my head and the entire process is a lonely one. I don’t write music for money or awards. It’s just my way of communicating with people,” says the 38-year-old in Beijing. Born in Hangzhou, Zhejiang province, Zhou graduated from the Shanghai Conservatory of Music with a major in composition in 2001 before training at Philadelphia’s Curtis Institute of Music, New York’s Juilliard School and the University of Southern California.

As Yu continues to urge more institutions and foundations to commission younger Chinese composers and offer them wider opportunities, the maestro also notes that musical content lies at the core of any work – and he wants more young composers to show off their creativity.

“A lot of people say there aren’t many opportunities for composers. But right now is a great time, in a way, because you can write whatever you want since the audience is so open-minded,” Yu says.

A Cockroach’s Tarantella is the latest collaboration between JACK Quartet and composer Du Yun. Released on August 13, 2020 by Modern Sky Ltd., the album is a mixture of recent compositions and world premieres. Scored for narrator, string quartet, and electronics, the titular work seeks to define and underscore the meaning of life and the existential dread that all of us feel, even cockroaches. Two narrated versions of A Cockroach’s Tarantella appear on the album, one in English and another in Chinese, both of which are performed by the composer herself.

A bit of a misnomer as epilogues tend to follow story endings, the album’s first track, “Epilogue,” serves as a beginning and features JACK Quartet’s brilliant improvisational prowess. Pitch bends between intervallically distant notes produce a light chromaticism and an atmosphere of general malaise. The slow, yet pulsing tempo contributes to the feeling of cycling between stress and relief. “Epilogue” also features a field recording by news reporter Yang Nan on the first day a market in Wuhan, China opened after having been closed due to the ongoing COVID-19 pandemic. Told from the perspective of a female cockroach named Uodfy, A Cockroach’s Tarantella begins with an exclamation of pregnancy. The quartet enters loudly and abruptly with a flurry of activity to underscore the excitement. Narrow melodic gestures are followed by more jagged riffs of only two or three notes. These fragmented moments turn into pointillistic chaos in the second movement, “I am Bored.” Call-and-response gestures keep JACK Quartet and Du Yun’s excited, animated, and tonally-varied narration in constant dialogue with one another, while the pacing of the narration and accompaniment quicken to signal impending rhythmic and melodic mayhem. The lack of a tonal center instills a sense of fear and unpredictability for the listener, as if to represent the almost human emotions that cockroaches might feel: joy, happiness, rage, or panic.

Middle movements such as “Next Life,” “Our Village,” and “The Impossible” maintain a balance between consonant, tranquil sustains and interruptions from the narrator to continue the ongoing story. The application of extra pressure on the bow against the strings creates a scratchy tone that is jarring and provides sonic variety. Repeated glissandi are passed around from instrument to instrument, imitating the sounds of sirens. Rhythmic gestures and sudden changes in dynamics and tone mimic the erratic behavior of cockroaches, often appearing and disappearing almost without a trace. These movements further highlight JACK Quartet’s skills as an ensemble, whose technical abilities are excellent.

In the penultimate movement of the piece, “Muilliska,” Du Yun introduces electronics and processing for the narrator’s vocals. Bell-like tones and whistles coupled with intermittent plucking and bowing all come together to produce an arid cacophony, emphasizing the uncertainty of existing in our modern world that is reiterated throughout the work. Ending with “Ocean,” sounds of flowing water painted by sparse textures help to finish off this cockroach’s journey.

Du Yun’s intention to reflect the often tense relationship between humans and cockroaches is cleverly realized by combining spoken text with the various timbral possibilities of the string quartet, which anthropomorphizes these insects. The inclusion of a version of A Cockroach’s Taratenlla in Chinese is reflective of the dualities of Du Yun’s identity as a Chinese-American immigrant and as a composer-performer. Her pride in those identities is unapologetic and provides important framing for understanding why nearly half of the album is dedicated to the same work in a second language. Tattooed in Snow for string quartet features a controlled dissonance and a more formal structure than the rest of the album. Mostly stepwise melodic figures evoke a sense of nostalgia and sentimentality, while tight harmonies provide a greater feeling of cohesion. The dense textures, scratchy tones, and hurried rhythmic motives that appeared in A Cockroach’s Tarantella also shine through Tattooed in Snow. A perception of distance and uncertainty permeates the work–it is difficult to tell if this is a result of the composition, or of the socially-distanced times in which we are all living. However, the style of this piece successfully complements the rest of the album.

Recorded during COVID-19 lockdowns, which has made the production of new music challenging, A Cockroach’s Tarantella is a timely album. JACK Quartet’s precise performance and malleability brilliantly realizes the composer’s intentions. Du Yun’s imaginative telling of her own story as a composer-performer is fascinating. Her style invites the listener in to explore the breadth of musical possibilities through a diversity of textures, tones, and melodies that present new and relevant thematic and programmatic ideas.