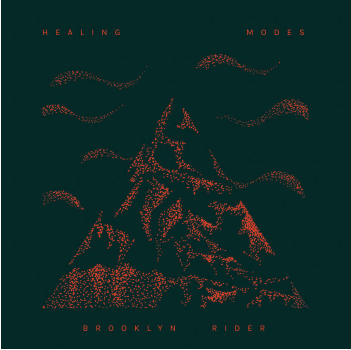 Healing Modes is nominated for a 2021 Grammy Award in the Best Chamber Music/Small Ensemble category.

The healing properties of music have been recognized from ancient greek civilization to the field of modern neuroscience, and expressed in countless global traditions. The slow movement of Beethoven’s Opus 132, ‘Song of Holy Thanksgiving From a Convalescent to the Deity in the Lydian Mode’ is among the most profound expressions of healing in the string quartet repertoire. Beethoven’s Opus 132 quartet is paired with 5 works commissioned for, and premiered by Brooklyn Rider. The composers include Reena Esmail, Gabriela Lena Frank, Matana Roberts, as well as recent Pulitzer prize winners, Caroline Shaw and Du Yun.

About “i am my own achilles heel”

i am my own achilles heel,

a form that would never shape

I am always fascinated by a fantastical world that lies in a reality,  a liminal state that lies at the edge of half fantastical, half hallucination. Years go by,  I am told this could be a condition  and there is a term for this condition: it is the world of Alice in Wonderland Syndrome.

According to the medical journal, although the cause of Alice in Wonderland Syndrome is unknown, the condition typically accompanies episodes of migraines. Affected individuals report feeling that different parts of their body are disproportionate in size and proximity and that their overall surroundings are “warped.” Specifically, these patients perceive objects as larger or smaller than they really are, thereby earning the syndrome its characteristic name.

There are many parts of the world, mental health is still considered as a taboo in the society. To share a piece of music is to say, we might all have fascinations, some real some really out there, you and I, us without them. Let’s share, let’s talk about it, let’s help each other out.

I am here for you, and you will I.

Du Yun turns inward and outward at once, evoking the societal stigma of mental illness. The concept proves sound: the juxtapositions are illuminating, the playing persuasive, and the timing almost impossibly serendipitous.

This pre-pandemic #tbt of Du Yun’s “i am my own achilles’ heel” was performed in front of a live audience atWGBHThis immersive and atmospheric piece evokes the neurological condition of Alice in Wonderland Syndrome, a disorder that affects and warps a patient’s perception of their surroundings, and this piece lies right there, at that liminal state of half-hallucination and half-fantastical unreality.

Goings on About Town

“Healing Modes,” the newest album by the adventuresome string quartet Brooklyn Rider, is based on a program the group refined in concerts during the past few years, but its core theme—the interconnection of music and healthfulness—could not possibly be more relevant or necessary than it is currently. In a season awash with now postponed events intended to celebrate the two-hundred-and-fiftieth anniversary of Beethoven’s birth, this collection is inspired by the third movement of the composer’s String Quartet No. 15 in A Minor, a luminous hymn conveying his thankfulness after he recovered from a life-threatening illness, in 1825. The quartet’s five movements are interwoven with five newly commissioned works that explore complementary notions. Reena Esmail and Gabriela Lena Frank, like Beethoven, expressively recall personal maladies overcome; Matana Roberts and Caroline Shaw address the U.S.-Mexico border conflict and the Syrian refugee crisis, respectively, as afflictions of the body politic; Du Yun turns inward and outward at once, evoking the societal stigma of mental illness. The concept proves sound: the juxtapositions are illuminating, the playing persuasive, and the timing almost impossibly serendipitous. — Steve Smith
(Read more)

Brooklyn Rider’s new album “Healing Modes,” which dropped March 27, takes Beethoven’s deeply felt ode to healing as its centerpiece. Come for the hymn of thanks, then stay with the album for new commissions by Caroline Shaw, Du Yun, and more.

It’s not just in writing or interpreting music that we consider time and place—listening is an act of context, too, and right now, healing, flourishing, and growth are ideas that provoke more than a bit of skepticism. But what distinguishes Brooklyn Rider’s Healing Modes (In a Circle Records) is that it doesn’t pretend to bring the listener fully to the end of that journey: healed. Healing Modes makes a strong case that healing is a process, one that makes space for the unavoidable discomfort or pain along the way. A hefty double album, Healing Modes alternates movements of Beethoven’s weighty Quartet No. 15 in A Minor, Op. 132 with five commissions in honor of the composer’s 250th birthday, all performed expertly by Johnny Gandelsman, Colin Jacobsen, Nicholas Cords, and Michael Nicolas. Across their performances of works new and old, the quartet displays boundless energy and nuanced care in shaping the big picture.

Inspired by Alice in Wonderland Syndrome, Du Yun’s i am my own achilles’ heel balances on the edge of distortion and clarity. Its soundworld is, as the composer puts it, “half-fantastical, half-hallucination.” An angrily sputtering, choked motive transforms as it is bounced between moods and textures. The recombination is never outright, and there seems always to be one voice protesting murkily in the background. Brooklyn Rider’s shifts back and forth to delicate and wispy harmonics are seamless, and their microtonal meandering through the piece’s closing gives the sensation of falling gently out of consciousness.
…
In the nearly 200 years since Beethoven’s death, musicians have become increasingly skeptical of teleological narrative arcs, that the healing inevitably has to result in healed. When the album closed with the declamatory “Allegro Appassionato,” I was left thinking about its distinct lack of triumph, its tiredness, and still feeling the haze of Du Yun’s composition. In those sad moments of Healing Modes, Brooklyn Rider preserves the bits of honesty so easy to overlook when the Op. 132 is presented by itself.