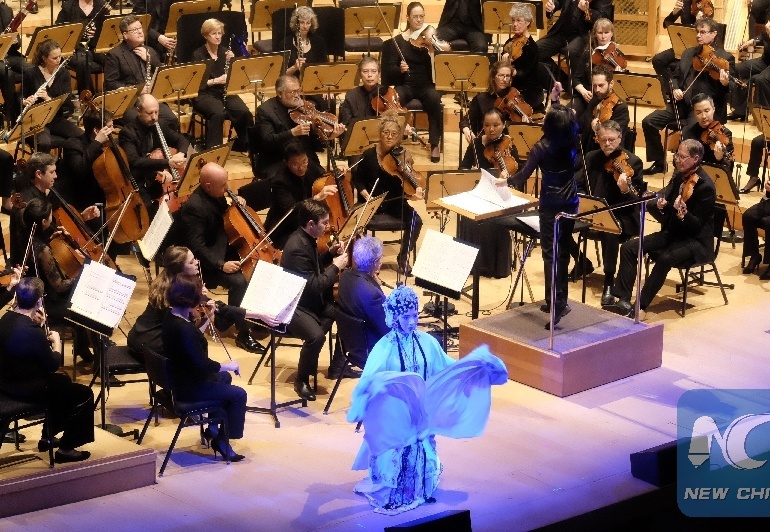 [Thirst] marked the first time in history that Xinchang Diaoqiang opera, a type of traditional Chinese opera that originated from Zhejiang Province, has been heard by an international audience.Xinhua

Thirst was co-commissioned by the Los Angeles Philharmonic Association as part of its centennial celebration.

It is said that in China, there are more than 300 regional opera styles, the more well-known Peking opera is one of them, so is the Diaoqiang opera, featured in this piece. At the end of summer 2016, I brought a team of researcher, scholar and filmmaker with me to Xinchang, a locale south of Zhejiang Province. Diaoqiang, is one of the oldest styles from Ming Dynasty, (around 1330 AC).

The Arias you are hearing in the piece are based on two of the oldest arias, from TieGuanTu and Mulian Jiumu.

In the traditional operas, the performers are cast into their roles from an early age. Our lead performer, Wang Ying,  for example, was trained only as an old man at the age of 17. She has to learn to sing, act, walk, kneel, and personify the old man in her daily meticulous training at the opera troupe academy.

As a creator, I often wonder about our projected role in our society and furthermore, our gender roles presented in the literature and theatrical works. So I experimented with giving her back to her woman identity at the end. In today’s world, our gender becomes more fluid and laden with complex layers. Who says a strong woman with a broader shoulder and a deeper voice cannot be cast a woman? The problem? The problem is we need to create new works for these traditional performers.

Based on the traditional text, I rewrote the lyrics to reflect this experimentation. The lyrics are about a sense of despair, and finding one’s own identity.

This is part of my initiative, FutureTradition, Revamping Disappearing Folk Arts and Regional Operas Project in China, leading a team of documentary filmmakers, visual artists, researches, playwrights with local regional folk opera troupes, regional theatre artists and scholars to make new works integrating the musical languages with a new narrative framework. This is also an effort to engage local communities with the power of their own dialects, examining the migrating languages.

About Diaoqiang Opera:
Diaoqiang was a popular form of theatre in the Ming Dynasty (1368AC-1683 AC）and the Qing Dynasty (1683AC-1840AC). Hangzhou was the hub, but there were opera troupes and societies all over the cities of Zhejiang Province. From the 1930s on when China was troubled with wars for two decades, coupled with the fact that there emerged new forms of theatre such as Luantan, Tanhuang and Yue Opera, it went into decline. Now Diaoqiang can only be found in the area of Xinchang,where manuscripts of libretti dating from late Qing are kept on archive,to a total number of 159. Diaoqiang was inscribed onto the first National List of Intangible Cultural Heritage for Preservation in China in 2006.

The Diaoqiang repertory can be divided into three main categories: the traditional, the topical, and the Monk Mulian Series. The traditional category includes zaju of Yuan, Nanxi (Southern Theatre) of Song, and zhuangqi of Ming and Qing. The Southern Theatre still retains the ancient presentation format of “singing with percussion accompaniment only, with chorus to back up the actors’ singing”, mixing singing with dialogue, and lines delivered with the fourth and sixth verses rhymed, i.e., traces of the Yuyaoqiang.The diaoqiang troupes have been giving performances mixed with zhuanqi stories in kunqiang vocal styles. Some productions are made famous when transplanted to other genres, such as the topical repertory of The Jade Hairpin to Yue Opera.  Ghost of a Woman Who Hangs Herself, Ghost of a Man Who Hangs Himself,The Righteous Messenger of Death in the Monk Mulian Series in Diaoqiang are not found in any other operatic genre in China.