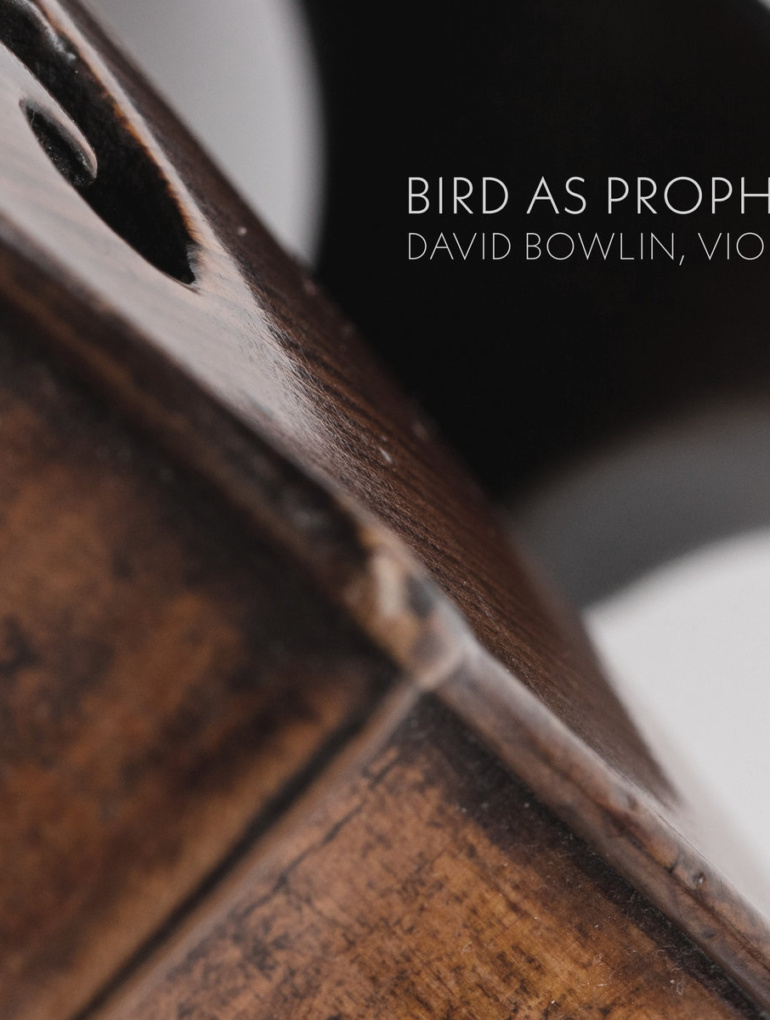 Bowlin’s “The Bird as Prophet” is a rich collection of contemporary approaches to violin writing. With an emphasis on the lyrical strengths of the instrument as well as a contextualization with the virtuoso violin tradition, the works on this recording cover territory from modernism to extended minimalism as well as drawing on music from traditions outside the Western art music canon. Bowlin’s extraordinary command over his instrument, and his characteristic expressive power, are the main voice throughout, a clarion call for narrative driven, intricately interpreted performance.

About “Under a Tree, an Udātta”

Du Yun’s Under a Tree, an Udātta has as its backing track a recording of Vedic Sanskrit chanting. Bowlin’s violin then performs an extended cadenza over the incantation, covering a wide swath of expressive territory, from wild glissandi and feverish scalar passages to rich melodic lines over a drone string. “Udātta” is a term for an inflected raised tone in Vedic chant, and one can hear similar microtonal shadings in the violin part, evoking the violin’s bowed cousins in Southern Asia.

The album closes with Du Yun’sUnder a Tree, an Udātta (2016). Against the gently rolling rhythm of Vedic chanting, Bowlin employs a vocabulary of harsh low tremolos, flitting arpeggiations, wide vibrato, and crunchy microtonal double stops. The most pervasive element of Under a Tree is the drone: supplied not only by the monks’ chanting, but also the violin’s open D string. Yet this drone differs from all previous examples within Bird as Prophet—not as a tonal anchor for shifting, searching harmonies, not as an expressive reflection of the melodic material above it, but as a true constant. While there is a sense of progression in the violin part, it is always in relation to a cyclic, timeless backdrop, a paradox of stillness within movement.

Under a Tree, an Udātta finally grants the listener rest and release from the turbulence of Bird as Prophet’s previous tracks. Striving for new perspectives and reconciliations with the musical past, the album acknowledges the violin’s place within the Western classical tradition, yet also revels in its versatility and ability to engage in dialogue with the globalized future. David Bowlin should be applauded not only for his artistry and command of his instrument, but also for his timely efforts to represent multiplicity and diversity in music, erasing boundaries instead of erecting them.
DANIEL SCHREINER
Read more

It was gripping, partly the result of some judicious editing. By taking a collection of her past chamber pieces and linking them together this way — and in one case superimposing them — Ms. Du managed to create a brisk, effective tour of her style. The exaggerated vibrato in the violin solo “Under a tree, an udatta” has an analogue in the sometimes woozy cello part of “Zinc Oxide, a tale of a seagull.”