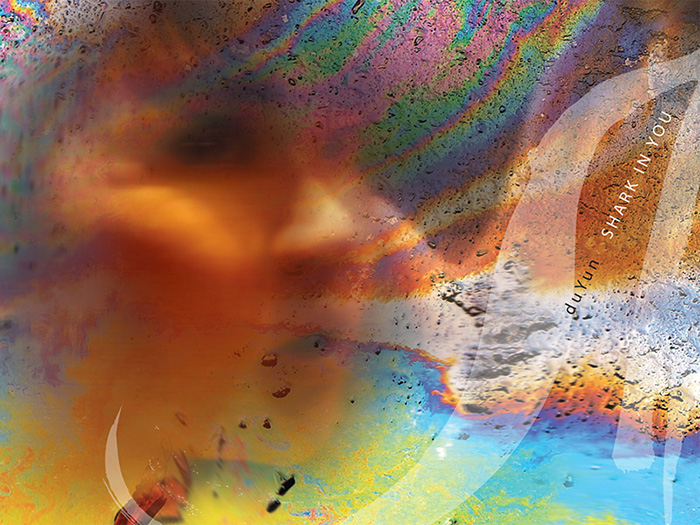 Shark in You is Du Yun’s debut recording under pop diva alter ego, duYun. Recorded and produced in New York, Shanghai, and Montreal, Shark in You features duYun as a composer, producer, lyricist, and vocalist. The tracks range stylistically from experimental dance music to Kurt Weill-esque neo-cabaret to jazz inflected electronica.

She is joined by collaborators spanning the avant-grade global music spectrum, from fellow members of ICE (International Contemporary Ensemble), to experimental DJ Erik Spangler, and musicians in the underground Shanghai jazz scene.

Du Yun is anything but shy or inhibited—she lets it all out in one way or another on every track, in such a way that by the end the listener feels as though s/he has been granted a temporary stay inside the artist’s brain.

View Shark in You Lyrics

There’s something uniquely satisfying about encountering music that doesn’t sound quite like anything one has heard before. This was my experience of Shark in You, a new CD from composer Du Yun. A rising star in the contemporary classical scene—she is a founding member of the International Contemporary Ensemble (ICE), and one of three composers on Boosey & Hawkes’s inaugural Emerging Composers roster—Du Yun has released a non-classical debut that matches the idiosyncratic, compelling strangeness of her concert music.

The infectious beats and breathy vocals of the first few tracks of Shark in You initially call to mind Björk. But as the album unfolds —and it is very much an album, best experienced as a whole—new dimensions continually emerge. The vocal and instrumental inflections seem to migrate imperceptibly from Asia to the Middle East. There are visceral cabaret numbers, songs that sound like Kurt Weill ballads reimagined for the twenty-first century, with Tom Waits and Jeff Buckley lurking in the wings. The disc culminates, surprisingly and effectively, in an effervescent remake of “Johnny I Hardly Knew Ye.”

The resonance between Du Yun and Björk ultimately has more to do with sensibility than sound. Their art doesn’t render genre irrelevant so much as it revels in transcending it. New Yorker music critic Alex Ross has written that Björk’s work is “free both of the fear of pretension that limits popular music and of the fear of vulgarity that limits classical music. The creative artist once more moves along an unbroken continuum, from folk to art and back again.” Shark In You reveals a similar fearlessness, a willingness to venture across stylistic boundaries in pursuit of a singular musical vision.

Sounds Heard: Du Yun—Shark In You
Reviewed by Alexandra Gardner
May 31, 2011

Du Yun has made a name for herself as a versatile composer and theatrical performer working in a variety of mediums, from orchestra music to art installations. For her recent CD Shark In You, she dons her “pop” hat, incorporating synth textures and trip-hop beats into her creative musical output. Joining forces on several tracks with composer/turntablist Erik Spangler, composer/electro-acoustic trumpeter Gareth Flowers, and cellist Matt Haimovitz, Du Yun unleashes a recording with an ultra-visceral sensibility that ropes the listener in through its attractively bizarre sonic landscape. The music gets so weird you kind of just have to keep listening.

The CD begins with an introductory burst of noise that gradually intensifies, leading into Stay, which swirls with jazzy horns, moody bass lines, synth tidbits, and processed vocals over a skittering beat. The title track Shark In You sports an infectious rhythm derived from sampled didjeridoo, sprinkled with Spangler’s characteristic DJ-style scratching and intensely whispered and semi-sung vocals by Du Yun.

Panacea is more foreboding, an aria with strange, granulated electronic background noises that morph into driving synthesized drum patterns. In contrast, The Grayfeels more like sultry cabaret, with intimate vocals, keyboard, horns, and a light touch with brushes on the drum set, while encounter has a radio drama quality—it tells a story of a conversation with a woman waiting for a bus—punctuated with bursts of piano, accordion, and drums on top of a wash of kazoos.

The tracks (If you say so…), i-Goh-Doh and especially Johnny I Hardly Knew Ye Remake are perfectly suited for the catwalk of any high-end fashion show, with their head-bobbing synth lines and thumping beats. I can only imagine what outfits would go with this music.

One of the most substantial works on this disc is the track Miranda, which, for all of the sonic territory it covers, feels like an opera condensed into just under six minutes. Co-written with Haimovitz, who also penned the lyrics, it is a thickly packed, dramatic musical expanse of voice, cello, piano, and percussion.

Throughout the CD, Du Yun’s voice is the mainstay—secretive whispers, singsong chanting, breathy gasps, and tortured screeches are everywhere, moving from front and center in some tracks to misty background washes in others. Although she tends towards sotto voce vocals, Du Yun is anything but shy or inhibited—she lets it all out in one way or another on every track, in such a way that by the end the listener feels as though s/he has been granted a temporary stay inside the artist’s brain. The consistently improvisatory, stream-of-consciousness feel that permeates every track is precisely what makes this set of compositions hang together.

Listening to this album makes me wonder what it’d be like to accidentally attend kind of a boring party and all of a sudden have some random girl wander up to you and be all like, “Did you know that I’m utterly insane?” and you’d be all like, “I don’t understand entirely; explain this to me further.” And so, to further clarify her point, she removes her head from her body and tears it open carefully — showing you all the tender inner workings. They vibrate in ways you can’t honestly understand, but which sort of intrigue and terrify you simultaneously. You just sit there stunned for a while, eventually only able to conjure forth, “Yeah, I see what you mean now,” as a response.

This is outsider music for sure, which is strange because it’s apparently an experimental composer from Brooklyn taking on her “pop” persona. Not much pop to speak of here — just freak out psychosis territory, although it’s not an altogether unpleasant brand of crazy. Being from an avant-garde / performance art scene of the more traditional variety, she toys around with a lot of “difficult” sounds which will be more than a tad off-putting to most. That’s kind of the point with a lot of the Tzadik-esque school of thought I suppose — not that I know much about it. As far as I can tell they try to make the listener uneasy with atonal bursts of unsettling aural discordia. I guess my complaint with this tactic is that half the time you feel like you’re just getting toyed with. If you’re going to make it weird, then weird it out already. Have at it.

Which is why Shark In You surprisingly works for the most part. duYun isn’t shy. Just when you think she’s going to mind-tease you forever, a bath of spastic electronic glitches unexpectedly bursts forth and you feel thoroughly and properly fucked. Is she even singing along with the beats? She’s just kind of mumbling and chant sighing incoherently. Then all of a sudden she’s doing spoken word about Dutch politics or some shit. What the hell is going on here exactly? See, she’s not playing around. She’s truly nuts, and the world’s a better place because of it. Thanks for sharing duYun; I’m just going to, you know, hang out on the other side of the party because you kind of scare me.

Du Yun’s voice has a piquant international flavor. Her style sounds like a blend of Iva Bittova (Czechloslovakia) and Björk (Iceland), with some early Yoko Ono mixed in. She coos, pouts, moans, and whispers between barely perceptible, heavily accented English words. On at least one song, “Johnny I Hardly Knew Ye Remake,” she reveals a concert hall voice as powerful as Annie Lennox. Her band plays a hybrid techno-jazz, with some startling hip hop effects thrown in, like turntablism and Sprechstimme.” She makes liberal use of overdubbing and electronic effects.

I like her. She’s unpredictable enough to command repeated listening and there’s plenty of stylistic variance from song to song (and even within most songs). “The Gray” starts in melodic ballad mode with a fixed rhythm, then speeds up unexpectedly – but not for long. Soon it reverts, states a recapitulation, and then it’s gone. “What was that?” you find yourself asking as you press the replay button.

Du Yun – whose real name is Yun Du – is a mysterious figure in the art music crowd. Look for her on YouTube and all you’ll find is a few hastily recorded garage band videos. This is her debut CD. She doesn’t have a Wikipedia page yet. You can find some information about her on MySpace, like long lists of awards and musical/extra-musical influences. She plays with members of ICE (International Contemporary Ensemble), the DJ Erik Spangler, classical cellist Matt Haimovitz, and jazz musicians from Shanghai.

This CD is a wild ride, well worth jumping aboard.

She is intelligent and urbane and even includes a darkly humorous short story, “An Encounter if at Noon, A Summer.” Its wry theme certainly stands out, like “The Gift” did on The Velvet Underground’s second album, White Light/White Heat (1968). She’s accompanied by piano and overdubbed vocals.

Her new New Wave bravado works most of the time. I play “Johnny I Hardly Knew Ye Remake” for visitors and some end up dancing to it. Most notable about it is her complete complaisance over intelligible lyrics. In nearly every song you can make out only about 7% of the words. I wonder about the wisdom of this approach, however. When you do start picking out lyric shards, like “18 levels down” and “life isn’t pretty for a tough cookie with crumb pearls,” you realize there’s possibly more poetry within that you’re missing. Shouldn’t artists be fined for not including them in their program notes?

The disc begins and ends with short perplexing pieces, whose throwaway styles bear no resemblance to the rest of the CD so don’t be misled.